The City Academy was inaugurated on October 25 by Mia Callenberg from the Global Environmental Facility (GEF). As a representative of UrbanShift's donor, the GEF, Mia welcomed the participants and spoke about the importance of urban-led climate action.

"UrbanShift’s role in supporting cities around the world to leverage integrated solutions to tackle systemic urban challenges, through its capacity-building offer coupled with local implementation, is extremely important," Mia said. "In our new funding cycle, GEF-8, the Sustainable Cities Impact Program has received more funding than ever before to support net-zero, nature-positive, inclusive and climate-resilient cities."

As the world heads towards 70% urbanization by 2050, and against the backdrop of a global biodiversity crisis, the theme of the Buenos Aires City Academy was as timely as practical. During the three-day event, participants were divided into two parallel training tracks: Green and Thriving Neighborhoods, delivered by the UN Environment Programme (UNEP), and Urban Biodiversity, delivered by the World Resources Institute (WRI). Simultaneous interpretation in Spanish, Portuguese and English was provided during the entirety of each training.

The training "Green and Thriving Neighborhoods: An Introduction to Integrated and Sustainable Design” provided opportunities for participants to learn about concrete planning and design strategies for transforming neighborhoods into livable, equitable, low-carbon and nature-positive places.

On the first day, participants heard from Serge Salat of the Urban Morphology and Complex Systems Institute (UMCSII) in Paris on how to use urban planning and design to create more sustainable and harmonious interactions between the built environment, nature, and people. This introduction was followed by a rich panel discussion among participants from Salta, Ushuaia, Oreamuno and the National Institute of Housing and Urbanism (INVU) of Costa Rica. In the afternoon, the focus of the training shifted to how to achieve net-zero targets and circular economy systems at the neighborhood level. The session was led by Hélène Chartier from C40 Cities, who also moderated an exchange on "soft," or non-motorized mobility, between Recife, Desamparados, Teresina and the National Secretariat for Mobility and Regional and Urban Development of Brazil.

On the second day, Salvatore Fundaro from UN-Habitat – a member of UrbanShift's Partnership Engagement Group – led a session dedicated to socio-economic strategies to enhance inclusion and health and stimulate the local economy in neighborhoods. He also facilitated a discussion on tactical urbanism, safety and community green space in the context of Campeche, San José and Buenos Aires. Finally, Elsa Lefevre from UNEP spoke about actionable policies, instruments and financing tools that support the implementation of sustainable neighborhood projects. Following this introduction, speakers from the city of Callao, WRI Mexico, the World Bank and BANOBRAS had a discussion on specific planning and financing instruments.

Throughout the two days, participants worked in groups to apply these theoretical concepts to three specific neighborhoods: La Favorita in Mendoza, the district of Capoeiras in Florianópolis, and Downtown Heredia in San José. Using maps and other tools, participants developed and defined interventions to better connect the neighborhood to the rest of the city – for example, through green corridors with accessible walking and cycling paths – and presented their proposals to the rest of the group.

In the Urban Biodiversity training, participants had the opportunity to learn from one another and from regional and international experts about the importance of urban biodiversity in increasing resilience to climate change and building the economic case for investment in urban biodiversity projects at the city level. Participants heard from Cristina Gómez Garcia-Reyes, the Lead for Urban Nature-based Solutions at the World Economic Forum (WEF); Pedro Ribeiro, the Manager for Urban Flooding at C40 Cities; Diego Moreno and Andrea Frasetto from CICLA, a Buenos Aires-based organization working on sustainable development challenges; and Felipe Garcia, the Head of Biodiversity Science at the Alexander von Humboldt Institute. Other speakers included Silvia Duque from WRI Colombia, Pablo Lazo from WRI Mexico, and Ted Wong, Bruno Incau, and John-Rob Pool from WRI.

The first day of the training focused on establishing why cities should consider urban biodiversity a priority among all the competing and urgent needs they face. The sessions emphasized the far-reaching benefits of urban biodiversity through the lens of ecosystem services, habitat quality and city governance. On the second day, participants dove into learning how to plan, implement, value, and finance city-led biodiversity projects. Citing the WEF’s BiodiverCities initiative as a case study and the Singapore Biodiversity Index as a tool that cities can use to assess their biodiversity profile, the day’s sessions built upon one another to provide participants with a solid foundation to design and lead urban biodiversity projects in their own cities. Participant experiences were highlighted through presentations, spotlighting biodiversity monitoring in Brasilia, the role of biological corridors for productive landscapes in San José; Recife’s watershed rehabilitation efforts; and the incorporation of biodiversity targets into Ushuaia’s climate action plan.

Over the course of the two days, participants engaged in an interactive role-playing exercise, taking on the persona of a character from the fictional city of Entre Ríos, with a specific interest in applying for a grant from an international NGO to advance biodiversity goals in their city. By the end of the second day, each character presented their proposal – either individually or in collaboration with other city actors – to the "Mayor" of Entre Rios, another fictional character randomly assigned to one of the participants. However, the Mayor declined to select a winning proposal, deciding that more integration between the city's various projects and actors was needed. The Mayor stressed that multidisciplinary teams that leverage a variety of skills and approaches result in more robust projects that typically deliver longer-term and more durable impacts.

Visit to the Urban Nature Reserve of Morón

The final day of the City Academy culminated with a site visit to the Urban Nature Reserve of Morón, a 14.5-hectare protected area in the Morón municipality situated 20 km west of downtown Buenos Aires. The reserve is located on the site of a former airfield and exemplifies elements of both City Academy themes: diverse urban forests and natural pampas grasslands and a densely urbanized mixed-use neighborhood with integrated public transport and active mobility connections to and through the reserve. Lucas Ghi, Mayor of Morón, welcomed the City Academy participants to the reserve and stressed the critical importance of well-maintained, safe and accessible urban green spaces for childhood development, human health and well-being, and community cohesion. After two days of intense indoor training, participants enjoyed time outdoors, walking through the forests and grasslands of the reserve and observing the indigenous plants and wildlife.

The UrbanShift City Academy in Buenos Aires was funded by the GEF, hosted by MAyDS, and organized by WRI and UNEP. To learn more about UrbanShift's capacity-building activities, click here.

The first UrbanShift City Academy in Latin America and the Caribbean brought together participants from 25 cities to receive training on urban biodiversity planning and management and designing vibrant, people-centric neighborhoods. 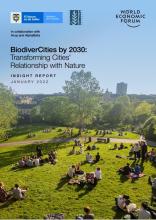 This report provides a vision for cities of the future and the needed systemic shifts to develop "BiodiverCities" that place nature at the heart of decision-making and infrastructure investments.

UrbanShift’s geospatial analysis for the San José metropolitan region will support urban actors to incorporate biodiversity into planning mechanisms and transform decision-making processes toward valuing the benefits of nature.